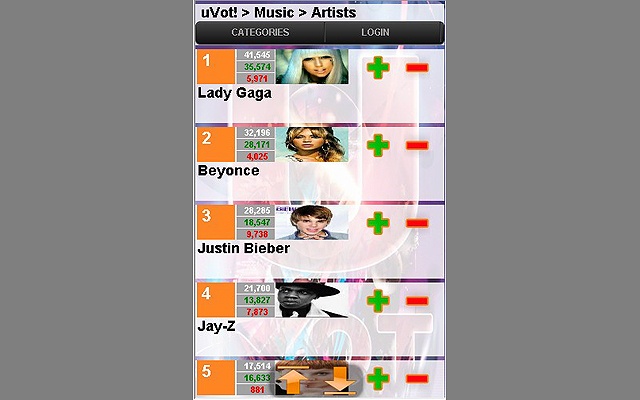 uVot is the place where your voice is heardWell, it's simple. Have you ever wondered why THOSE people won the Grammy? Or why did the Academy gave the award to THAT movie you really thought was worse than a few homemade clips you saw on Youtube? Yup, we know how it feels. How about for once YOU decide what's cool and what deserves to be in trashcan? How about this time YOU take action and chose for yourself?!
It's eaiser then ever!

You choose! You vote!

So many people these days think they know better. But do they? I mean, do they know what you like? Or what you don't? Nope, we don't think so. We think everyone chooses what's best for themselvs, not what YOU like. And, besides that, you know everyone has their own little interest, and then quality and good taste doesn't matter anymore. We all know about those nice looking girls with no talent or voice (no offence to anyone) who are pushed in front everyday to sell their image (again, probabyl it happens like that ;) ) That's why we made uVot! Here, you choose! Here, you vote! Here, you tell us what's the best, the coolest or the opposite, what you don't like and think it shouldn't get any attention. This way, they have no excuse anymore to not care what you like.

It's easy. And simple. And new. Well, maybe there are some other places where you can share your opinion, but not like this. Why? Because on uVot you can tell us what you like AND what you DON'T like. YOu can either give a positive vote (+) or a negative vote (-).
Logic, when you + someone, one vote will be added. When you - someone, one vote will be taken.
And we take everything into consideration when we establish the rank (we use a pretty complicated mathematical algorithm developed in partnership with some important mathematicians). So nothing is left out when it's about offering you the most pertinent results. At the same time, you can also see chart in 3 different other ways, besides the main view:

Total votes
Most positive
Most negative
But it's not that easy to establish who's the numero uno, for the main chart. It's not a normal chart, where people only give a (+) vote and who has the most, is the best. There are few things that we need to take into consideration, at uVot, when we decide which one is number 1. Why? Think about it. Let's say MovieA has 1.000 votes, all positive. And MovieB has 1.000.000 votes, but all negative. Which one should be number 1? MovieA, which has only 1.000 votes or MovieB which has 1 million, but all negative? From one point of view, MovieA should be, since a lot of people like it. But from the other point of view, MovieB should be number one, if we look at how much people heard about it, even if in a negative way. In other words, MovieA has more fans, MovieB is more popular, again, even if in a negative way. That's why we thought and talked and thought again, we consulted some very good worldwide known mathematicians, we made calculations and scenarios, which one is more fair, which one is more accurate, which one is more close to reality. And we found a solution! Everything counts! More or less. That's why we made an algorithm where we take everything in consideration, Total votes, Poistive votes and Negative votes, in different mathers and using square root and % and fraction and this and that.... Pretty complicated, actually. But we can be sure it's as fair as possible, considering all the aspects. And besides, we have the other views as well, if you don't trust our algorithm enough. You can always see which one is the most popular (Total votes), most appreciated (Most positive) or most hated (Most negative).

This just to make you sure we REALLY don't play here. And that you see what we're doing from all the possible points of view.

Why should You vote?


Exactly, why should YOU vote? You probably think it won't change anything from how the things are. Hmm, is it? Now, TV or radio station are mostly using focus groups to see what's hot or not or look at the critics. Stores do the same, also manufacturers. But all the time these are very small groups of people which decide instead of you what's hot, not even talking when something it's not hot, but they have the interest to push it in front. And as the psychologists already proved, when you're hit every day with something, good or not, after some time you tend to like it, or at least accept.

But that's wrong! It shouldn't be this way. That's why you HAVE TO VOTE! It's easy for them to promote something when a focus group consisting of 1.000 people say something is good, or looks nice, or feels great, but they will have a REAL problem when, let's say, 3.000.000 people say it doesn't. They will have to do something about it. YOU will force them to take action and change/remove/transform/improve it. And all this because of YOU, because for the first time YOU took the matter in your own hands and showed them "This is not cool!".

On the other hand, you can show them what you like too. You can let them all know your prefernces, the things you think are the best, no matter if we talk about music, movies, cars or travel destinations. And this is another way to force them promote the good stuff, plus, the others have a chance to see what's really good. Simple!

And it's free! You don't have to pay anything, you don't have to do anything special. Just come back every day and vote what you like or what you don't, or both! You can vote any entry once every day, either negative or positive. How about that?

What's in for us?


Good question. Well, not much. We are people with principles. And, as we said before, just like you, we want to see the good people receiving appreciation, the people who deserve it, not just someone who's pushed there. We want to see the good products promoted, not what they want. And we're sure you want the same thing. And the best thing, we can make our voices heard! Besides that, not much....


What can you vote

We decided to start with these categories. We thought that they are the most representative ones and that will cover the most important domains from all areas. But, we want to make uVot exactly how you want it to be, so don't hesitate to tell us if you want something else to be added or something removed/changed. For now, you can vote in these domains:

So how about you go vote and show them what you like? ;)