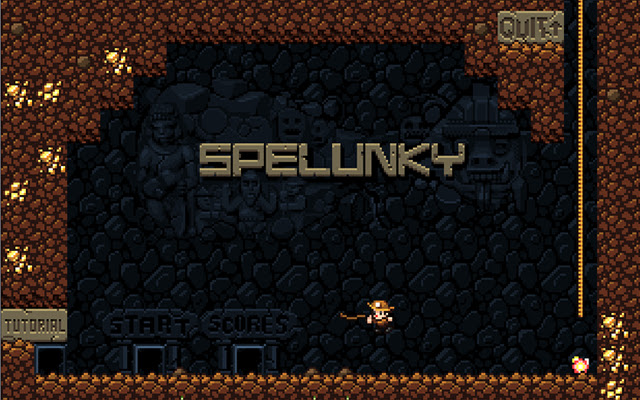 Spelunky is a cave exploration / treasure-hunting game inspired by classic platform games and roguelikes, where the goal is to grab as much treasure from the cave as possible. Every time you play the cave's layout will be different. Use your wits, your reflexes, and the items available to you to survive and go ever deeper! Perhaps at the end you may find what you're looking for...

"Challenging, addictive, thoughtful and beautiful, Spelunky is a stream of constant delight. The icing on the cake is that it's free... There are no excuses not to play this. You have been warned." -Lewis Denby, HonestGamers

"While failure is a part of life, in Spelunky every play feels like a fresh chance to get it right." - Gus Mastrapa, Paste Magazine

"The game maintains a nice balance of tight precision puzzles and breezier areas that let your caver stretch his legs. And while the visuals are chunky, everything in the game, from flaming frogs to yetis, moves with a carefully calibrated grace." -John Teti, The Onion A.V. Club

"Derek Yu's Spelunky may well be one of the most unassumingly mindblowing games of the last 10 years." -Anthony Burch, The Escapist

As mentioned above, this game was made by Derek Yu; Darius Kazemi ported the game over to Google Chrome. I make no claim of ownership, nor do I present it as my work. This version contains the necessary fixes that were causing the original Chrome app to fail when loading. I have made multiple attempts to contact the original developers - but not being able to reach them, I have implemented and republished in order to get this great game working again.