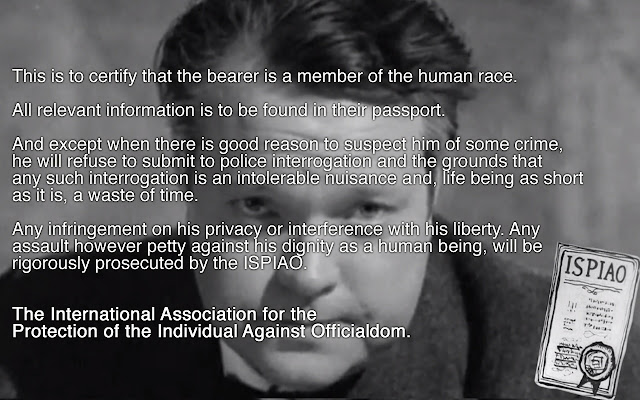 “This is to certify that the bearer is a member of the human race.

All relevant information is to be found in their passport.

And except when there is good reason to suspect him of some crime, he will refuse to submit to police interrogation and the grounds that any such interrogation is an intolerable nuisance and, life being as short as it is, a waste of time.

Any infringement on his privacy or interference with his liberty. Any assault however petty against his dignity as a human being, will be rigorously prosecuted by the ISPIAO.

The International Association for the Protection of the Individual Against Officialdom.”

In a 1955 BBC programme, Orson Welles was filmed doodling in his sketchbook and talking (apparently extemporaneously) about whatever struck his fancy. The program was called, straightforwardly enough, Sketchbook.

In one episode, Welles speaks about his experiences with the police and with customs officials as he travels (which he did a lot). He finds the growing power of the cops to be officious and dangerous. His words are perfectly applicable today.